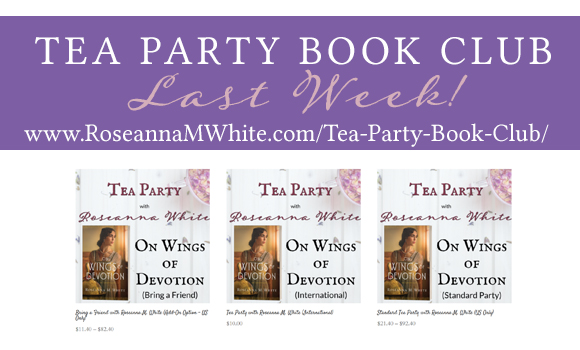 I find myself still super-busy with release stuff…plus helping my mom, who just had back surgery last week. So this week on the blog, I’m going to be highlighting some of the fun offerings still waiting for you for the release of On Wings of Devotion!
Today:

This is the LAST WEEK to sign up for the tea party book club to chat about On Wings of Devotion! Packages will ship on Friday, so if you’ve been considering joining me, don’t wait too long! As of the writing of this, I have a few seats lefts both on Friday and Saturday.
Friday, January 24
7 pm EST / 6 pm CST / 5 pm MST / 4 pm PST
Saturday, January 25
1 pm EST / 12 pm CST / 11 am MST / 10 am PST
I’ve done 7 of these parties now, and let me just say that they’ve been SO MUCH FUN. There were a few hiccups in the early ones as I sorted everything out, LOL, but we’ve really got the hang of it now. 😉
I do also have a couple scholarships ready and waiting! People have been so very generous this month! So if you’d love to go but the funds just aren’t there right now, consider applying for one of those scholarships.
Apply for a Scholarship
There’s also a bring-a-friend add-on, so if you and a sister/mother/daughter/friend have both read the book and want to come together (sharing a screen), you can add a second treat package for just the cost of the food. =)
Hope to see you there!

And coming next time, something really fun we’ve been working… T-SHIRTS!! More about that soon. =) 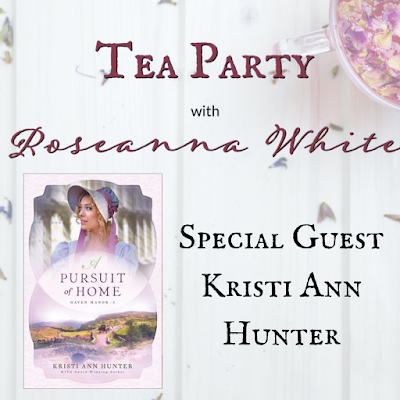 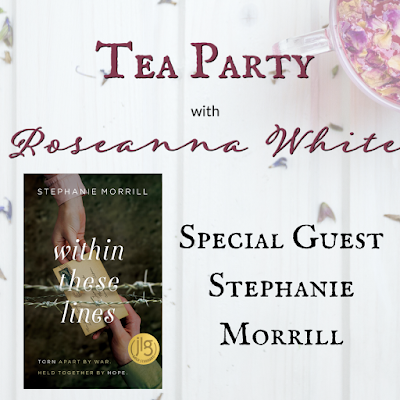 I am looking forward to hosting my best friend and fellow author, Stephanie Morrill!
Join us as we discuss her recent book, Within These Lines. You can purchase a signed copy of the book as part of the tea party OR you can find it at the retailers below. 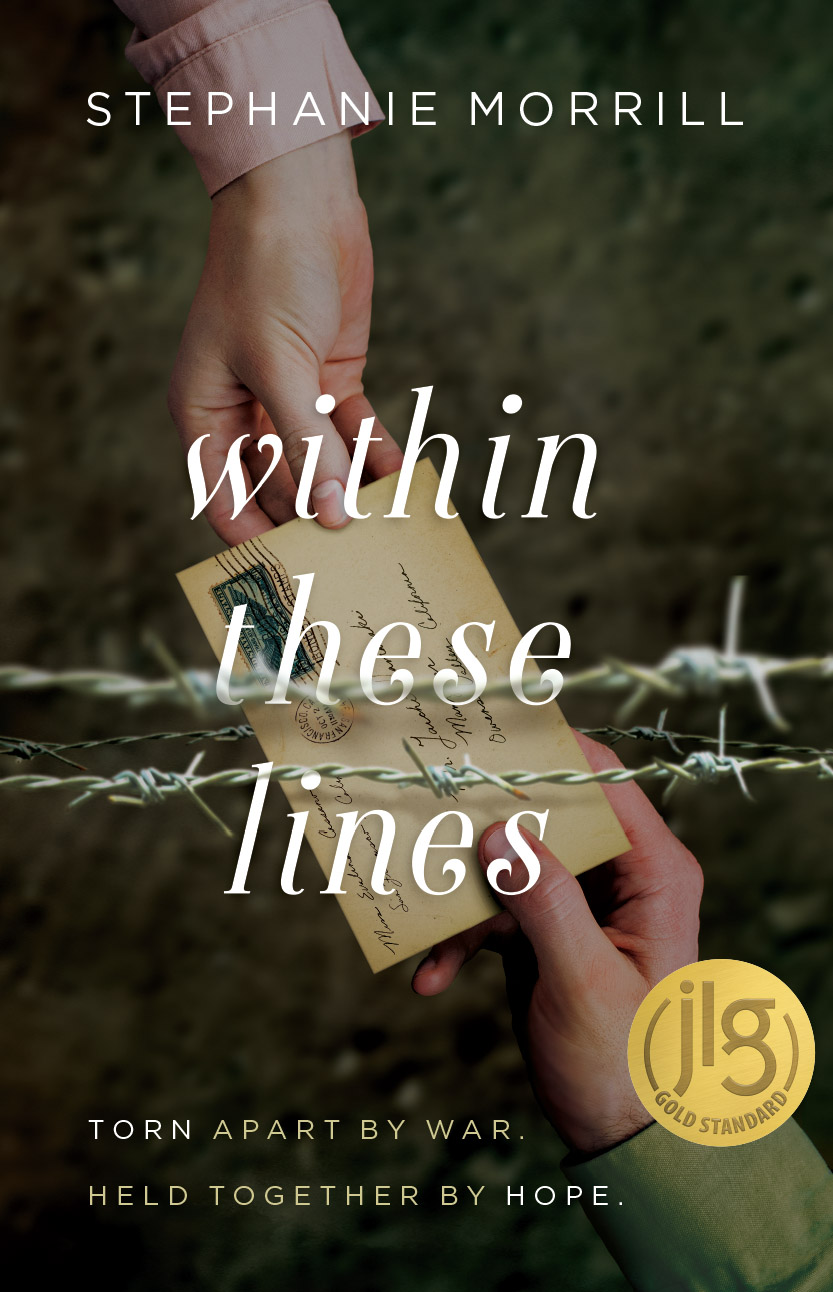 Evalina Cassano’s life in an Italian-American family living in San Francisco in 1941 is quiet and ordinary until she falls in love with Taichi Hamasaki, the son of Japanese immigrants. Despite the scandal it would cause and that inter-racial marriage is illegal in California, Evalina and Taichi vow they will find a way to be together. But anti-Japanese feelings erupt across the country after the attack on Pearl Harbor, and Taichi and his family are forced to give up their farm and move to an internment camp.
Degrading treatment makes life at Manzanar Relocation Center difficult. Taichi’s only connection to the outside world is treasured letters from Evalina. Feeling that the only action she can take to help Taichi is to speak out against injustice, Evalina becomes increasingly vocal at school and at home. Meanwhile, inside Manzanar, fighting between different Japanese-American factions arises. Taichi begins to doubt he will ever leave the camp alive.
With tensions running high and their freedom on the line, Evalina and Taichi must hold true to their ideals and believe in their love to make a way back to each other against unbelievable odds.
Within These Lines is a story about the gritty, exhausting side of love.The kind of love that seems to only invite heartbreak, but is tenacious and unrelenting all the same. It’s available in stores now! (From author website)
Amazon | Barnes & Noble | Christian Book 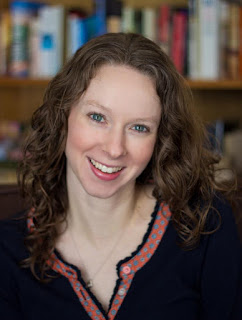 Stephanie Morrill writes books about girls who are on an adventure to discover their unique place in the world. She is the author of several contemporary young adult series, as well as the 1920s mystery, The Lost Girl of Astor Street, and the WWII era romance, Within These Lines. Since 2010, Stephanie has been encouraging the next generation of writers at her website, GoTeenWriters.com. She lives in the Kansas City area, where she loves plotting big and small adventures to enjoy with her husband and three children. You can connect with Stephanie and learn more about her books at StephanieMorrill.com, Instagram, Facebook, and Twitter. 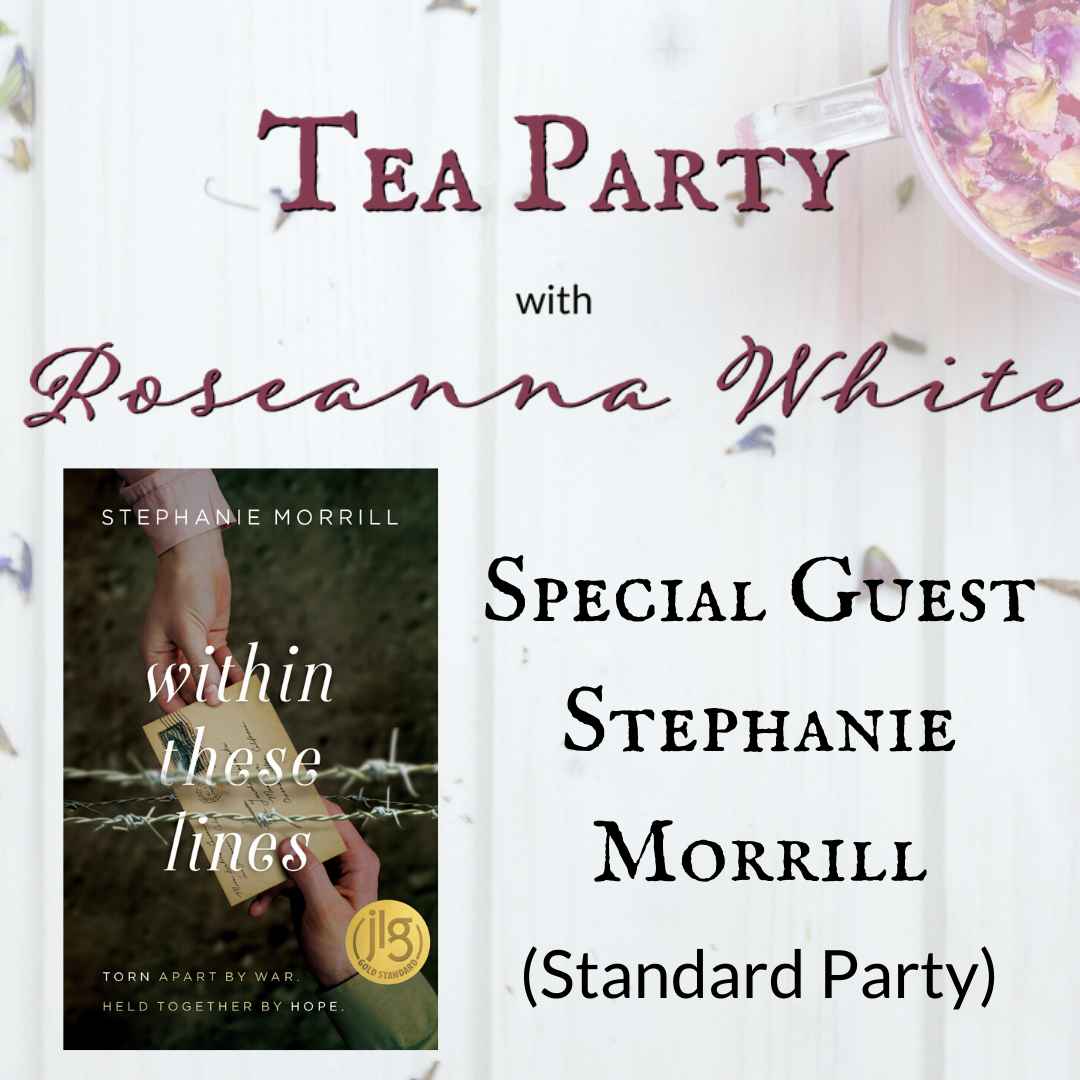 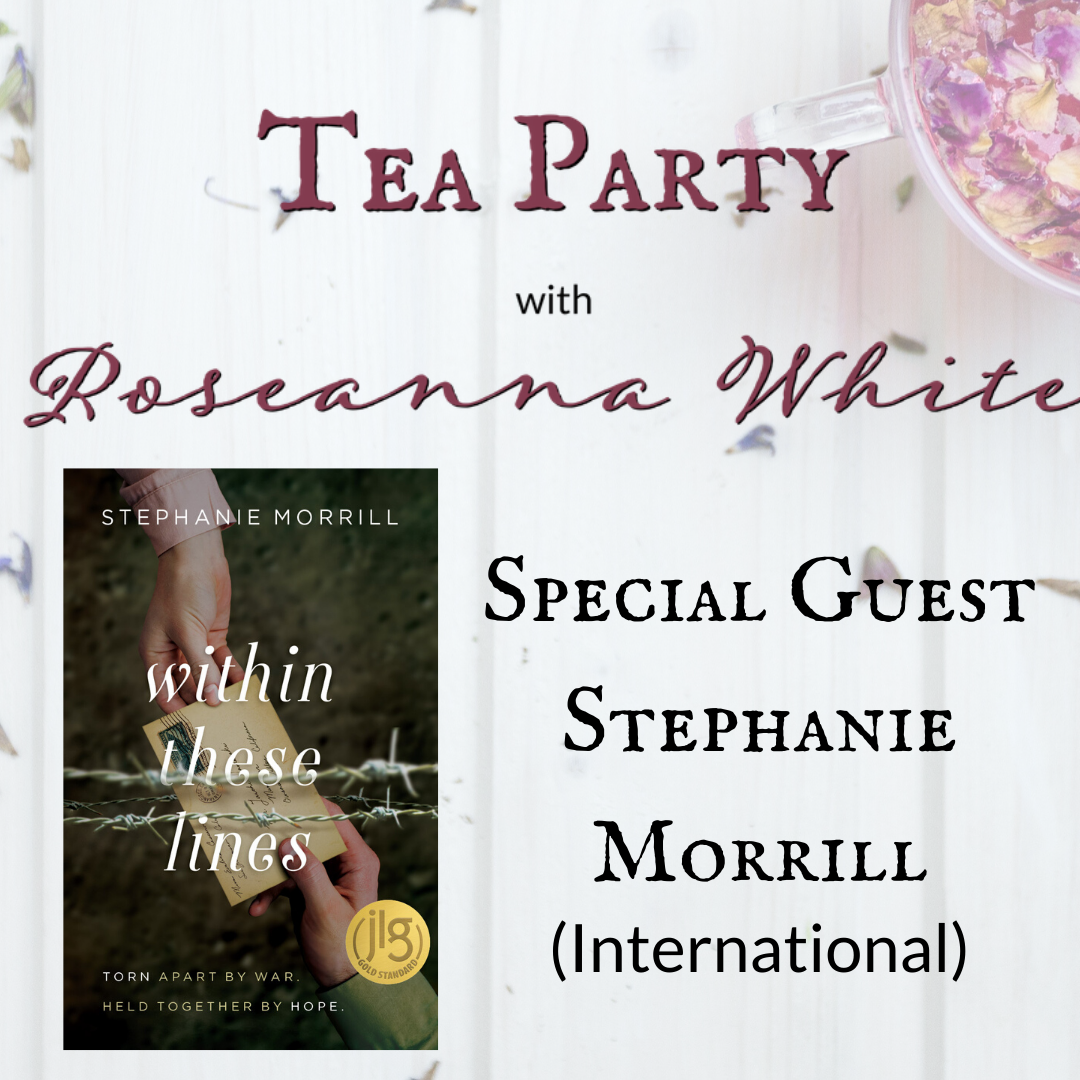 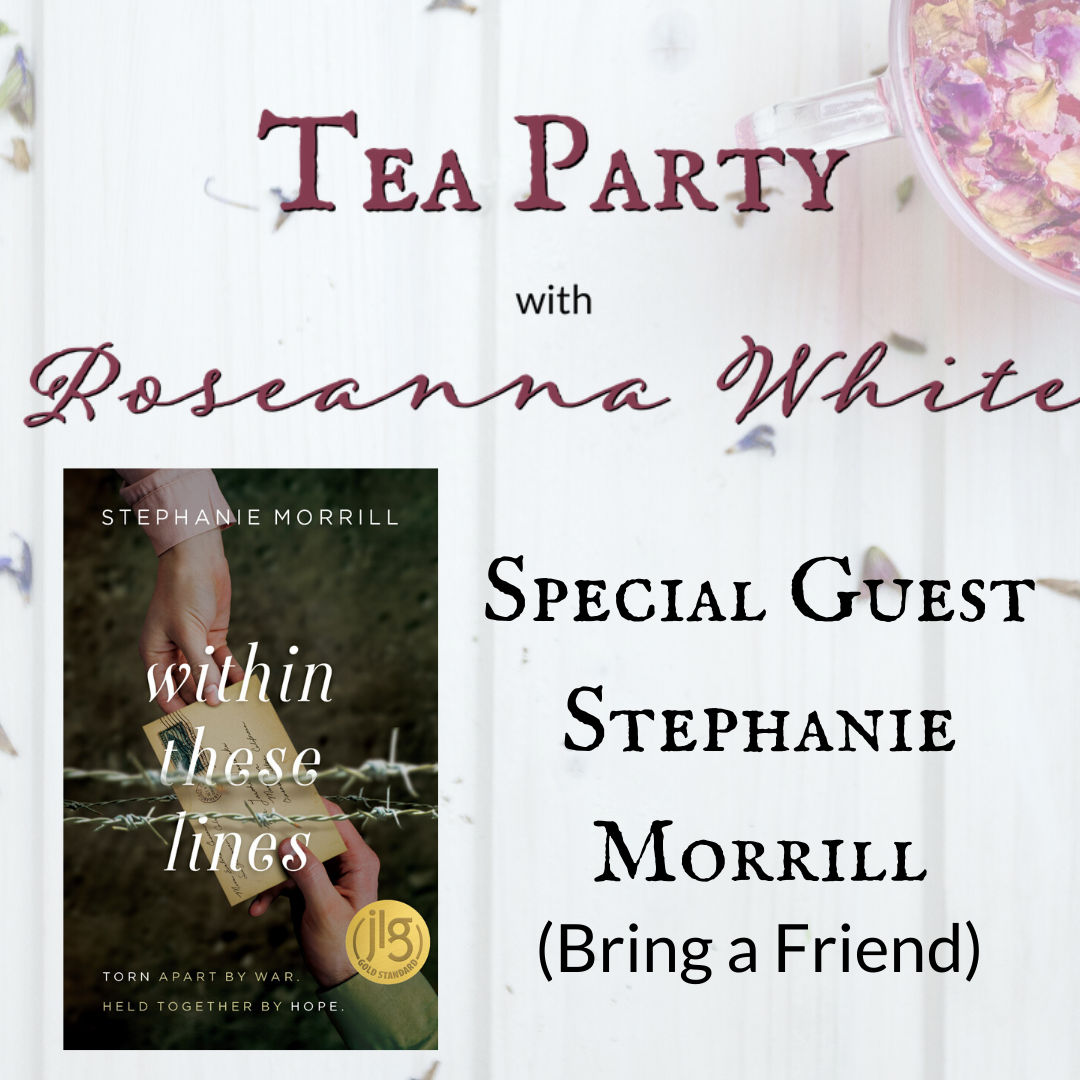 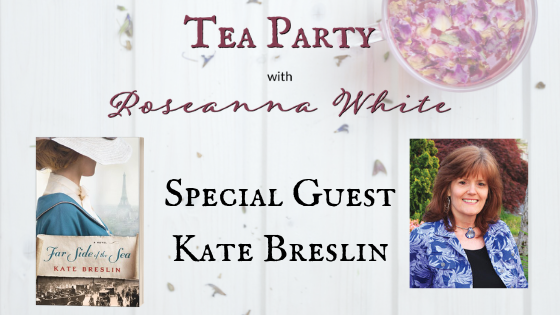 
Reserve Your Seat
We have a few different options for attending this tea party! Reservations will close on August 20th so that we have enough time to mail out all your goodies.

Standard Party
US Only
International
Seat at the party only…No goodies shipped (sorry!)
Bring a Friend
Share a screen and get a discount for bringing a friend!
Add-Ons
tea party Starter Kit
Signed Copy of Far Side of the Sea

Tea Options
We have a few different flavors from our last party. You get to choose from…

You will receive steeping bags ideal for your brew option. So make sure you let us know if you are using a 2-cup pot or brewing by the cup.

Apply for a Scholarship

You can find more information on how the Tea Party Book Club works on the landing page HERE. Please let me or my assistant know if you have any questions. 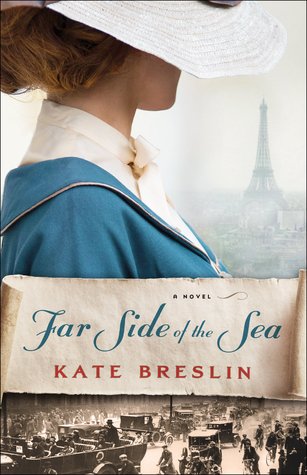 In spring of 1918, Lieutenant Colin Mabry, a British soldier working with MI8 after suffering injuries at the front, receives an unexpected message by carrier pigeon: it is an urgent summons from Jewel Reyer, the woman he once loved and who saved his life—a woman he believed to be dead. Leaving Britain’s shores to return into war-torn France, he hopes his reunion with her will ease his guilt and this mission restore the courage he lost on the battlefield.

Colin is stunned when he arrives in Paris to discover the message came not from Jewel, but from a stranger who claims to be her half sister, Johanna. Johanna works at a dovecote for French Army Intelligence; having found Jewel’s diary, she believes her sister is alive and in the custody of a German agent. With spies everywhere, Colin is at first skeptical of Johanna, but as they travel across France and Spain, a tentative trust begins to grow between them.

When their pursuit leads them straight into the midst of a treacherous plot, however, that trust is at stake, as danger and deception turn their search for answers into a battle for their lives. (From the author’s website)
About Kate
A Florida girl who migrated to the beautiful Pacific Northwest, Kate Breslin lives on a small bay in Washington State with her guitarist husband and family. Kate has written travel articles, published award-winning poetry, and her fourth novel, Far Side of the Sea, released with Bethany House Publishers in March of 2019. When she’s not writing inspirational fiction or spending time with author friends, she’s reading books, watching anything Jane Austen on BBC, or following hubby John’s musical career as his #1 fan. An avid nature lover, she enjoys long walks in Washington State’s beautiful woodlands or working in her rose garden. Kate’s also a traveler–she and John have toured much of the U.S. and with her intrepid mom as traveling companion, Kate’s also been abroad–Paris, Munich, Rome, Pompeii, Athens, and Barcelona, just to name a few. She’s always looking for the next story idea!

Hope to see you there! 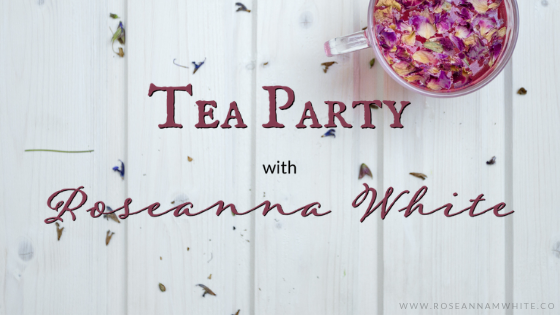 The Number of Love Tea Party!

There was so much enthusiasm and engagement with the Tea Party Book Club Launch that I decided to host a second round of tea parties!!! YAY!!! The dates are:

We will be discussing The Number of Love, and it is highly recommended that you read the book before the tea party.
Fill out the form below to reserve your seat today because space is limited!!! The form will close 7/24 to allow enough time for shipping the goodies.
You can find all the detailed information about how this virtual tea party will work, HERE.